About the Distribution Map

Although the range of the Gray-banded Kingsnake (Lampropeltis alterna) north of the U.S.-Mexico border is fairly well known, this is not the case south of the border. Knowledge concerning the Mexican distribution of the various Mexicana kingsnake species is meager and for many areas non-existent. The majority of the relatively few known localities within Mexico have received repeated visits from herpetologists and hobbyists over the past several decades, while there has been comparatively little effort given to exploration of new areas. Thus, the range map presented here contains abundant speculation, combining known records with our knowledge of habitats, greatly aided by input from friends and colleagues having relevant field experience. As drawn, the map omits point localities, instead offering up only broad generalizations concerning hypothetical ranges. Ongoing field studies by Mexican and American herpetologists will undoubtedly contribute new records, and we will periodically update the map to reflect new information. Indeed, although not reflected on this version of the map, Durango Mountain Kingsnakes (Lampropeltis greeri, yellow on the map) have now been recorded from the state of Nayarit, so our knowledge of that species’ distribution continues to grow. This map is interactive—clicking on either a species name or its colored range will direct to you the image gallery for that species. UPDATE: A recent publication by Hansen & Salmon (2017 – you can download the paper HERE) contains detailed range maps that reflect the most recent field discoveries. 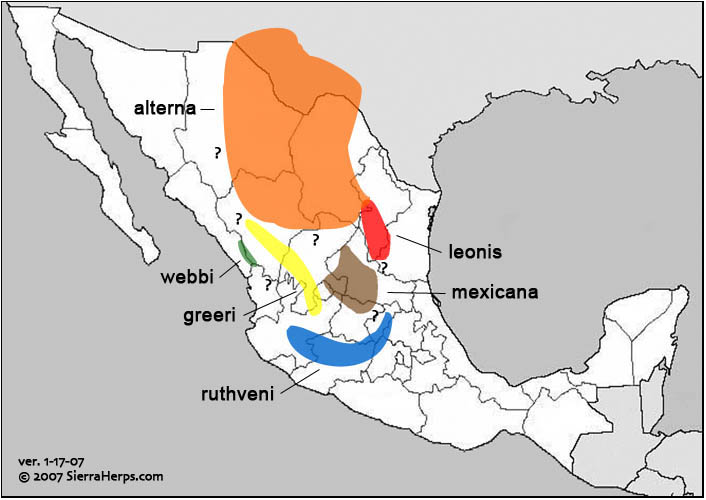 The map below depicts the physical geography of Mexico and the southwestern USA. We include it here to give readers some idea of the remarkable topographic diversity that characterizes the collective range of Mexicana Kingsnakes. A higher resolution version may be downloaded (888k file) and examined in greater detail than the screen version shown here. This screen version is interactive—clicking on the red dots or locality names will take you to the corresponding habitat photo gallery. A future edition of this map will include links to Texas and New Mexico locality galleries. 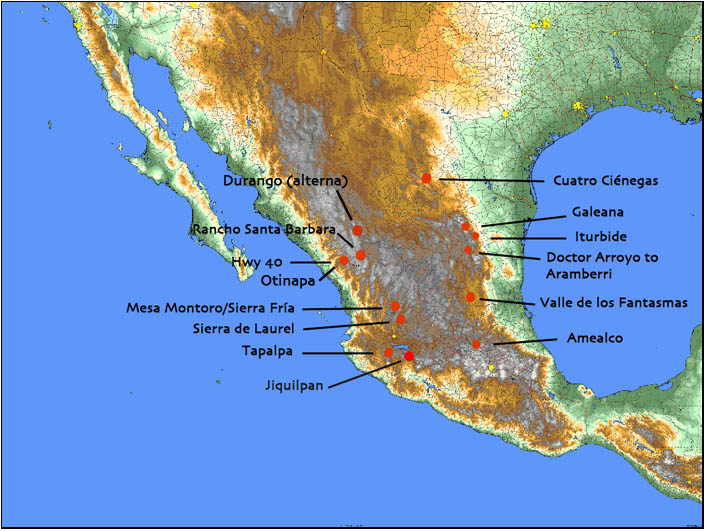